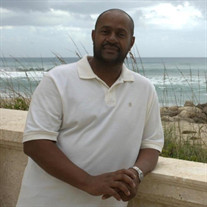 On Friday December 4, 2020, Conrad “Trevor” Lord loving husband and father passed away at the age of 61. Conrad was born on November 29, 1959 to Thomas Monroe and Rose Ann Lord in Antigua, West Indies. He was a Realtor but also known as MR FIX-IT. Conrad migrated to the United States in 1980 where he met and married Marjorie on November 18, 1983. They have a son Jalani and a daughter Maegan. He also have daughters Breeann and Nia. Conrad had a passion for helping people, a love of home projects and fixing cars.But what he enjoyed the most was playing Table Tennis. He represented his country in several tournaments and won the Ambassadors Cup at the OECS Invitational Top Eight Championship. Conrad was proceeded in death by his father Thomas Monroe, his mother Roseann and his sister Hyacinth. He is survived by his wife Marjorie, his son Jalani, daughters, Maegan, Breann, Nia, his siblings; Katie, John, Cynthia, Lyra, Rosalind, David, Linda, Marilyn, Pauline, Schmidt, Johnese, Ava, brother-in-laws, cousins and a hosts of nieces and nephews. For Floral Arrangements; The Family is using: Simply Perfect Celebrations Stephany Rivera (561) 460-3649 Sandra Moncada (561) 843-2211

The family of Conrad A Lord created this Life Tributes page to make it easy to share your memories.