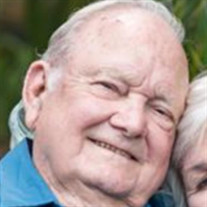 Connie, known as BOB Wideman went to heaven on Sunday, November 29, after a valiant battle with kidney failure. He was surrounded by his bride of 66 years, Joyce; his son, Larry; his daughter Tina and a host of heavenly family that escorted him home. He was a man who accomplished great things and did everything with perfection in mind. His heart was huge and his talents were many. Born on April 26, 1935, Bob grew up on Talley Hill in Irondale, Alabama. Leaving his high school sweetheart, Bob joined the Air Force to establish a career for their future. It didn’t take long for him to realize he couldn’t live without Joyce. He came home on leave and left 3 days with her as his wife. Bob’s life mirrored his love of airplanes and flying. Eastern Airlines hired him as a mechanic where he worked for 30 years and was active in the AMFA union. After earning his pilot’s license, he used his knowledge to build two private planes. As Director of Faith Flying Missions at Grace Baptist and Perrine Baptist Church in Miami he led many trips transporting supplies and missionaries to enable God’s Word to be spread. As Youth Pastor he drove a bus of teenagers to Teen Valley Ranch in North Carolina each summer encouraging them to discover God’s love. Many have returned to thank him for the influence he had in their lives. He was an integral part of the development of Grace Baptist Church and was devoted as a faithful servant there. Upon the dissolvement of Eastern Airlines, Bob found himself with a new career at Westminster Christian School as a Maintenance supervisor. He was consulted many times with an idea to provide innovative ways for kids to learn. No matter how lofty, he would work hard to turn those ideas into reality. Everyone knew he has a soft spot “for the kids.” In 2003 Bob and Joyce decided it was time to built their dream home in West Palm Beach to be close to family - “the grandkids”. They were blessed to find a new church family as well at Connect church in Royal Palm Beach. It didn’t take long for them to find their place to live out their love for the Lord. Bob’s heart flourished as he served on the building fund for the Children’s Ministry and orchestrated the purchase of a bus for senior trips and activities. Many seniors enjoyed community and the opportunity to travel because of his efforts to organize trips to Isreal and other places in the US. He worked with the Fair Ministry mentoring some of the men workers and renovated a trailer to house supplies and provide a place for volunteers to prepare and serve meals. Each week he faithfully served as an usher loving on people inside the sanctuary after Joyce loved on them in the lobby. The highlight of Bob’s service came when he became a member of Campers on Mission. He and Joyce were blessed with a month of serving at Billy Grahams Cove in North Carolina where his love for the Lord exploded bring him great joy. Bob played many roles in life. One of his most favorite was being Pop Pop to three grandchildren, Taylor, Olivia, and Austin. His heart burst with pride even more as four great granddaughters arrived within eight months of each other absolutely stealing his heart. The family is thankful that 3 generations of children were blessed by his love. A lot of who they are today is because of his example. Bob will be revered as a faithful servant of God who spoke with his heart and did everything he could to provide greatness for all to enjoy. His legacy as a man of honor and excellence will be remembered forever. Services will be held after the first of the year at Connect Church in Royal Palm Beach. Notification of arrangements to follow.

Connie, known as BOB Wideman went to heaven on Sunday, November 29, after a valiant battle with kidney failure. He was surrounded by his bride of 66 years, Joyce; his son, Larry; his daughter Tina and a host of heavenly family that escorted... View Obituary & Service Information

The family of Connie Eugene Wideman created this Life Tributes page to make it easy to share your memories.