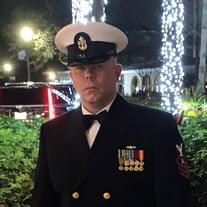 Clayton McCollum, known to friends and family as "Clay", passed away December 29, 2019 at the age of 33. Clay is survived by his wife Christina Moran McCollum; his precious child Madison Lynn McCollum; his parents Debbie McCollum Thrash & Step-Father Robert L. Thrash; his grandparents Janet L. Guanche & Step-Grandfather Arnold Guanche; his soul mate Johanna Grace Turner; great aunts and uncles Robert & Kathy Lynch and Rickey & Paula Lynch; uncle Clifton McCollum and a host of cousins. He was predeceased by his great grandmother Mary E. Lynch, great grandfather Elton M. Lynch and Grandfather Thomas Louis McCollum A native of Ft, Lauderdale, FL, Clay graduated from Wellington High School in 2004. After high school, Clay had tried several different apprenticeship programs and various other jobs after graduating high school and found he was not satisfied with this life. After two years of trying to find his niche he decided he wanted to serve his country. Clay wanted to be a part of something bigger and he felt serving his country would fulfill this. He always had a deep love for his country and showed this by joining the U.S. Navy. He reported to Recruit Training Command in Great Lakes, IL, December 11, 2006. After graduating boot camp, Clay went to the fleet as an undesignated Seaman. A few years later he tested for and was advanced into the rate of Navy Gunners Mate (GM). The GM rate has been part of the United States Navy since the late 1700s, dating back to when this branch of the service was founded. From cannons and muskets to sophisticated weapons systems such as missiles and torpedoes, the Gunner's Mate has played a critical role in the success of the Navy. During his years of service, Clay was stationed on board several ships including USS Germantown (LSD-42), a Whidbey Island-class dock landing ship and USS Farragut (DDG-99) a Arleigh Burke-class destroyer. While on assignment with the USS Farragut Clay was loaned to the USS Philippine Sea (CG-58) a Flight II Ticonderoga-Class Guided Missile Destroyer as their VLS Technician until a permanent replacement could arrive on board. He also was stationed with Maritime Expeditionary Security Squadron (MSRON) 5 and Naval Special Warfare Group ONE and Navy Recruiting District (NRD) Miami. Clay always lead by example, setting the standards high and expecting his Sailors to match his. While serving on active duty, he obtained a Bachelor of Arts degree in Homeland Security and Emergency Management from Ashford University in 2016. Clay worked his way up the military ranks reaching the rank of Chief Petty Officer in 2018. To an outsider it’s just a rank, however the Navy Chief has existed for more than 120 year and Clay was proud to freely accept the responsibility to bear the traditions and long-standing lineage beyond the call of printed assignment. Clay was selected to join an elite brother and sisterhood, the like of which is not found anywhere else and he was welcomed with open arms. Being called “Chief” was one of his biggest accomplishment of his military career. Not only was Clay an accomplished Sailor but he was a devoted father as well. Madison Lynn McCollum was the joy and light of his life. He always said the one thing better than being called Chief is being called dad. Clay will always be remembered for the love and affection he showed his family, friends and shipmates. His comradery, loyalty and service to country will carry on in the Sailors he worked with and lead. During his years of service, Clay was awarded numerous awards including: Good Conduct Medal Active (4), Global War on Terrorism Expeditionary Medal, Global war on Terrorism Service Medal, Overseas Service Ribbon, Navy and Marine Corps Achievement Medal (10), Sea Service Deployment Ribbon (3), Army Achievement Medal, Expert 9mm Pistol Medal, Navy “E” Ribbon, Expert M4 Rifle and the Military Outstanding Volunteer. The viewing service will take place 6 P.M. – 8 P.M. (EST) on January 9th at Palms West Funeral Home located at 110 Business Park Way, Royal Palm Beach, FL 33411. Public viewing will continue 10 A.M. - 12 P.M. (EST) January 10th at Palms West Funeral Home immediately followed by the funeral service. He is to be buried at South Florida National Cemetery 6501 State Road 7, Lake Worth, FL 33449, January 10th at 2:00 P.M. (EST).

The family of Clayton Robert McCollum created this Life Tributes page to make it easy to share your memories.

Clayton McCollum, known to friends and family as &quot;Clay&quot;, passed...