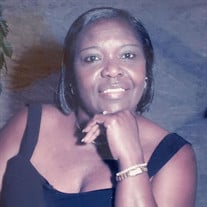 Claudette Pantora (Woodhouse) Smallhorne, a loving and courageous wife, mother, grandmother, aunt and friend, was born on June 2, 1951, in Old Works, St. Catherine, Jamaica. She was the eighth of nine children, born to the late Shirley and Annorah Woodhouse. As a young woman, in 1975, she migrated to Westbury, Long Island. There she worked in many jobs to maintain herself and support her son, Garth who was still in Jamaica. Garth later joined his mother in the USA when he was 8 years old. Seeking to do better for herself, in 1984 she decided to pursue a career in Nursing and two years later became a nurse. She worked as a nurse in New York hospitals, nursing homes, and mental and geriatric health facilities. In 1990, she moved to Florida where she continued her nursing career, including working for Armor Correctional Health systems for over 22 years. While attending Westbury Gospel Tabernacle, in 1987 Claudette accepted Jesus Christ as her Lord and Savior and was later baptized. In Florida, she continued her faithful christian service at Royal Palm Baptist Church and ultimately at Horizon Baptist Church, where she regularly attended for the past 12 years. In 1993, Claudette met Michael and a year later they married. Over the years Michael has been a loving partner and most especially he has been her strongest supporter and caregiver during her illness. In 2016, Claudette received her cancer diagnosis. She completed her course of treatment and was on her way to recovery but, several months later her illness returned. Claudette considered herself truly blessed to be surrounded by her loved ones, family, friends and caregivers. On December 2, 2020, God called Claudette home. She accepted the offer from her Lord and Savior, Jesus Christ, to spend eternity in full fellowship with Him. Claudette leaves behind her dedicated husband Michael; her loving son Garth; her precious grand-daughter Annorah; sisters Sara and Esmie; brothers Selvin, Arthur, Abe, Clennox and Burton; brother-in-law Douglas; sisters-in-law Yvonne, Faye, Mary, Beverley and Monica; god-daughter Rodenia; and many nieces, nephews, cousins and friends to mourn her passing. She was preceded in death by her sister, Shirley, and her grandson, Kahron. Claudette has fought the good fight, she has finished the race, and she has remained faithful. And now the prize awaits her - the crown of righteousness. 2 Timothy 4 v 7-8. For donations in honor of Claudette's memory please direct them to: Horizon Baptist Church Building Fund, 12965 Orange Blvd, West Palm Beach, FL 33412

Claudette Pantora (Woodhouse) Smallhorne, a loving and courageous wife, mother, grandmother, aunt and friend, was born on June 2, 1951, in Old Works, St. Catherine, Jamaica. She was the eighth of nine children, born to the late Shirley and Annorah... View Obituary & Service Information

The family of Claudette P. Smallhorne created this Life Tributes page to make it easy to share your memories.