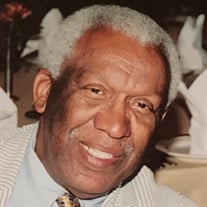 Bernard Stewart Dorsey, son of the late James Dorsey, Sr. and Margaret (Johnson) Dorsey was born on March 6, 1941. On Sunday, December 5, 2021 he departed this life to begin his eternal life. On May 25, 1995, Bernard was united in holy matrimony to Valerie (Weaver) Dorsey and they established residence in Mt. Laurel, NJ. Bernard was a sales representative at Eagle Electric Supply Company, and in 2003, after 37 years of employment, he retired and moved to West Palm Beach, Florida. In 1994, Bernard and Valerie enjoyed their first trip together to Mexico, and for Bernard, this was his first flight. They further enjoyed traveling to Aruba and St. Martin to celebrate their birthdays each year, and later, with best friends, Audrey and Lloyd Campbell, they made their way throughout the Mediterranean and Caribbean. Bernard hung up his traveling shoes a few years ago and decided he would simply relax at home. Bernard received his education in the Wilmington Public School System, Wilmington, Delaware. As a young man, he was an avid basketball and pool player and as he grew older, he became fond of watching sports, including boxing, basketball, and football. Everyone was always prepared for a good laugh whenever Bernard began telling stories and jokes, sparking a good argument, or challenging them with trivia questions. If you knew Bernard, you know he loved his children dearly and he constantly worried about them. He looked forward to daily check-ins with Bruce (Dorsey, Sr.) and Bernadette (Dorsey Whatley), as well as his grandson, Bruce Jr. He frequently called some of his nieces and nephews, just to ‘touch base’ and chat. He prided himself in giving guidance - - whether it was with Bruce and his business ventures or with Bernadette and her career or home projects. If Bruce or Bernadette could not be reached, he was known to call their spouses. Bernard saw these calls as an opportunity to impart his knowledge, offer advice, tell a funny story, or travel down memory lane. His grandson, Bruce Jr. said, “his daily calls will always be precious and special to us”. In recent years, Bernard spoke with his older brother Clarence a few times a week and they would coordinate which fights, football, or basketball games to watch that week. He also loved to sit outside and talk to the neighbors, especially Freddie. Bernard was preceded in death by his parents, James and Margaret Dorsey; first wife, Barbara W. Dorsey; siblings Mary E. (August) Wilmore, Charles W. (Emma) Dorsey, Sr., and James W. Dorsey; sisters-in-law, Geraldine Dorsey and Sirletta W. Matthews. He leaves to cherish his memory: his wife, Valerie A. Dorsey; his brother Clarence E. Dorsey, Sr., brothers-in-law, Ralph A. (Sandra) Woodson, Jr and Albert C. (Celeste) Matthews, Sr.; children, Bruce A. (Lisa) Dorsey, Sr., Bernadette Dorsey (Hiram Sr.) Whatley, and Joseph (Nazish) Weaver; grandchildren Bruce A. Dorsey, Jr., Kysha Mowbray, Senait Weaver, Anisah Weaver, and Yousef Ahmed; godson, Rahsaan (Tiffany) Matthews, Sr. and special nieces, nephews, cousins, and friends whom he adored. Life will not be the same without Bernard; however, he has made a permanent imprint on our lives and his memory will be forever cherished. Lovingly submitted, The Family

Bernard Stewart Dorsey, son of the late James Dorsey, Sr. and Margaret (Johnson) Dorsey was born on March 6, 1941. On Sunday, December 5, 2021 he departed this life to begin his eternal life. On May 25, 1995, Bernard was united in holy matrimony... View Obituary & Service Information

The family of Bernard Stewart Dorsey created this Life Tributes page to make it easy to share your memories.