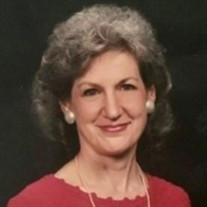 MACARTNEY BARBARA L. (nee WOOLERY) Beloved daughter, wife, mother and friend, passed away peacefully on Monday, January 10, 2022, in Wellington, Florida, at the age of 83. Barbara is survived by two daughters, Lynne Spotts (Jeff) and Joanne Chaplin (Tim) and five grandchildren, Lara, Garrett, Greg, Megan and Christopher. She was preceded in death by her parents, Earl and Elizabeth Woolery, and her beloved husband, Jesse V. Macartney, Jr. An only child, Barbara was born in Darby, PA on Valentine's Day in 1938. As a young girl Barbara was a Girl Scout and studied classical ballet for many years and gave recitals with her dance group in various communities. She graduated from Marple-Newtown High School and briefly attended the University of Miami. She later became an American Airlines stewardess and got reacquainted with Jesse in 1960, who had known her since she was one years old as both families were very close and would usually summer in Stone Harbor, NJ. Barbara and Jesse fell in love and married in 1965 and settled in Narberth, PA and raised two daughters. Including being the quintessential homemaker, Barbara's hobbies included aerobic dance, Latin dance, ballet, gardening, travel, crewel and needlework, cooking, journaling, watching General Hospital, and visiting their extended families. She and Jesse were devoted members of the United Methodist Church of Bala-Cynwyd, PA, and served on many committees. Barbara enjoyed playing in the handbell choir for over twenty years and they both attended Sunday school and Bible Study groups. Later, her church family migrated over to the Ardmore United Methodist Church in Ardmore, PA. They enjoyed travel through Europe upon Jesse's retirement in the 80's and celebrated their 50th wedding anniversary in 2015. After Jesse passed away in November 2019, Barbara lived near her daughter, Lynne, in Wellington, FL for the last 2 years of her life. Barbara will be deeply missed by her family and friends. A celebration commemorating her life will be held in Pennsylvania at a time and place to be determined.

The family of Barbara L. Macartney created this Life Tributes page to make it easy to share your memories.