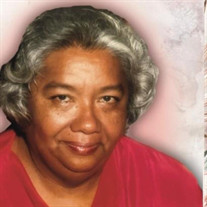 Audrey Helene Newman was born on February 23, 1936, in Pleasant Valley, Jamaica, WI to Charlotte Anne Flyter and George Soltau. Her childhood can be best described as humble and filled with love. Milton Newman was her childhood sweetheart, who lived nearby. His mother, Louise Knight, affectionately nicknamed Audrey “pea dove.” Audrey spent her childhood years through secondary school in Pleasant Valley, where she met and married Ewart Grant, who was a principal of a school. They had a beautiful wedding in Brixton Hill, and it was considered a big event in their town. She later moved to Toms River, Castleton, Jamaica where she started her family. Audrey and Ewart had their first daughter Angela Grant in 1959. During Audrey’s time in Toms River, she was a house wife, known for having many talents such as sewing, knitting, playing the organ, singing, and dancing. She also worked as a monitor at a school. In Jamaica, Audrey became a US immigration agent in order to help others gain their green cards to move to America. She also sold life insurance. Many family members were able to migrate to America because of Audrey’s efforts. During this time, she was often traveling back and forth between NYC and Jamaica. Seeking out new opportunities, Audrey migrated to New York City in 1963, leaving behind her family temporarily. In 1964, Audrey had her second daughter with Kennith Jacobs, Maxine Jacobs was born in Queens Jamaica, NY. In 1969 Audrey went back to Jamaica for about 2 years, where she opened up her own bar and shop in Mandeville, Jamaica. Managing he business, all while still working as an immigration agent. This was Audrey’s final long term stay in Jamaica. Audrey permanently moved to NYC in 1971, bringing up her daughter Angela. During this time, she worked as a nurse assistant at Jewish Institute for Geriatric Care (JIGC), and settled in Queens, NY. She later brought up her mother, Charlotte, to America in 1973. In 1975, Ewart Grant passed away, and Audrey became a widow. She continued to persevere and support her family. Audrey earned her real estate license, and had a knack for business and sales. She bought and sold homes for profit, before it was the fashionable thing to do. Audrey ventured back to Jamaica where she rekindled her relationship with her childhood sweetheart, Milton Newman. She married Milton Newman in 1978, and he moved up to the states with Audrey in 1979. Audrey loved the warm climate and planning beach and fishing trips, so she visited Miami, Florida until ultimately deciding on relocating to Florida in 1983. She continued nursing private duty, but as her health declined she started child care from home. Her talents such as playing the organ, sewing, knitting, and singing, stayed with her through the years. Her move to Florida inspired her family members to transition to Miami, Florida as well. Audrey later relocated to Palm Beach County in order to retire in August 1996. She bought an acre of land and built a house. She had an eye for architecture and was very involved with the details of her last home. Audrey and Milton Newman enjoyed the acre of land, where they both could plant and care for goats and various animals. The land and animals brought back fond memories of their hometown in Pleasant Valley, Jamaica. Audrey Newman is survived by her husband Milton Newman, Her two daughters; Angela and Maxine, many grandchildren and great grandchildren, and many loved ones.

Audrey Helene Newman was born on February 23, 1936, in Pleasant Valley, Jamaica, WI to Charlotte Anne Flyter and George Soltau. Her childhood can be best described as humble and filled with love. Milton Newman was her childhood sweetheart, who... View Obituary & Service Information

The family of Audrey H Newman created this Life Tributes page to make it easy to share your memories.