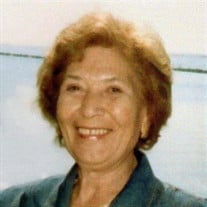 Antonietta "Nonna" Bekir, 94, of West Palm Beach, Florida, passed away on Thursday, July 30, 2020. She was born to parents Gaetano Ippino and Carmella, on June 24, 1926, in Rome, Italy. She leaves as her legacy three living children: Immacolata Kot, Lucia Gardner, and Veliko Bekir; her grandchildren Hairije (Irene), Christina, Steven, Antonietta (Tetta), Idris (Wawa), Clelia (Lillian); and her great-grandchildren, Sophia, Jacop, Phillip, Reed and Mila. She also leaves to cherish her memory of numerous nieces and nephews in Italy. She was preceded in death by her husband Idris, son Rosario, brothers Augusto and Federico, and her sister Titta (Concetta). Her children remember her as a remarkable mother who was able to accomplish the impossible. Antonietta was a seamstress and nurse’s assistant during, and post WW II until the family immigrated to the US. The move to America was to obtain the best medical treatment for their son who had contracted polio while in Italy. Though the family arrived by plane, all their earthly belongings sank on the Andria Doria, and help came from the Rotary Club. From 1956 until her later years, the family worked on a farm in Chimacum Wahington, then moved to Brooklyn where they opened a pizzeria. In the years that followed, she worked as a maid and finally as a companion until she retired. She was passionate about family, friends, and cooking Italian as well as Albanian foods. Annual Christmas parties and Thanksgiving Dinners were always held with as many friends as would fit in their small Brooklyn house. Laughs, singing, and music filled the room as her husband would play some Albanian tunes on a flute that he made. Needless to say, over her lifetime she affected the most positive change in people and will be dearly missed. The family has entrusted Palms West Funeral Home And Crematory with the arrangements. A private Cremation will be scheduled and Memorial Service will also be scheduled for a later date.

Antonietta "Nonna" Bekir, 94, of West Palm Beach, Florida, passed away on Thursday, July 30, 2020. She was born to parents Gaetano Ippino and Carmella, on June 24, 1926, in Rome, Italy. She leaves as her legacy three living children: Immacolata... View Obituary & Service Information

The family of Antonietta Bekir created this Life Tributes page to make it easy to share your memories.