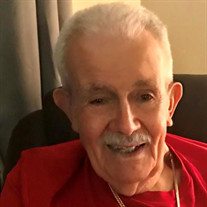 Anibal Robert “Bob” Velez, 87, of West Palm Beach, Florida passed away on September 5, 2021. Bob was born on January 20, 1934 in the Bronx, New York. A graduate of Morris High School, Bob enjoyed stickball in the streets of his neighborhood, loved Orchard Beach, was a lifelong Yankees fan, and enjoyed flying kites. One of his greatest pleasures was flying kites with his granddaughters. On New Year’s Eve 1953 he married the love of his life, Maria Del Valle, who then became Maria Velez. They celebrated 57 years of marriage until her passing in 2011. Bob and Maria were active in their Bronx community and were founding members of the Spanish-American Community Club of Co-op City, that grew to over 100 members. The club had a positive impact throughout the Bronx; raising funds for student scholarships, visiting local nursing homes, and organizing cultural and educational programs. Employed by United Parcel Service as a tractor trailer driver for 25 years before retiring, he was a proud member of the International Brotherhood of Teamsters Local 804, Long Island City, New York, and earned membership in the “Million Mile Club,” for which he received a plaque and a belt buckle from Mack trucks that he proudly wore. Although his daily schedule required him to travel hundreds of miles, he was home every night in time for dinner with his family. Maria was a great cook and he liked to say that every day was a Sunday dinner at the Velez household. Before his UPS career, Bob often held two or three jobs simultaneously to keep food on the table and a roof over his family: driving cabs and city buses tirelessly. In 1996, Bob and Maria retired to Florida. Solidly old school, Bob resisted buying a cell phone for the longest time, but when he finally caved-in and bought one under pressure from his family he said: “I can see now why these phones come in handy!” His battle with medical issues in recent years showed his courage in facing life challenges with strength and a smile. Bob Velez was a loving husband, generous father, big “little brother” to Hennie and Gloria, doting Tito, and loyal friend. Over the years he helped each of his children, among others in times of need, quietly. Bob’s family was his greatest joy. He felt blessed to enjoy his children and their families: his daughter Cathy Velez-Lippman (Gary), sons Glen Velez (Gail), Robert Velez (Marcy) and Christian Velez (Valentina); his grandchildren Jenna and Jacqueline Velez Lippman, Kerry Velez-Busby (Michael), Alyssa Velez, Ileana and Jasmine Velez, and Joshua Velez; his sister Margaret Poling (Don); and friends he readily and warmly welcomed as extensions of the Velez family. In Bob’s honor the family asks that you perform a random act of kindness.

The family of Anibal Robert Velez created this Life Tributes page to make it easy to share your memories.