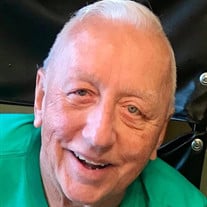 Andrew Cyril Dax lovingly known as “Gramps” was born to eternal life on the morning of September 27, 2020. He was preceded in death by his loving wife Genevieve Olecki on March 18, 1997. Mother Mabel and Father Herman, brothers Earl, Roland, Herman and Leon, sisters Estelle, Mabel, Marlene & Audrey. He is survived by his brothers Marvin and Dave, three children Susan (husband Todd), John(wife Gerry) and Jason(wife Jennifer) along with 6 grandchildren Allie, Adeline, Phoenix, Eddie, Emerson and Evie all of whom he adored, loved and inspired him. Born into a farming lifestyle in the town of Kewaunee Wisconsin Andy was gifted with an insatiable focused mind and inner drive which lead him to work in the larger cities of Milwaukee and Chicago. After graduating Kewaunee High School and upon successful completion of his United States Naval reserve duties as a sonar technician and attending college classes at Green Bay, Marquette University, and UWM he began his ascent up the corporate business ladder. He worked as Director of Purchasing at Kearney & Trecker, Vice President of Materials at Trent Tube, and eventually Director of Facility Design & Planning of Enesco. While at Trent Tube his Vice President position led him to spearhead the construction of a manufacturing plant in Europe from scratch. During his time at Enesco he was responsible for designing and constructing high end meticulous showrooms in both Chicago and Manhattan. Though great success was achieved in business his family was his main priority. Andy was athletically gifted playing many sports including basketball, tennis, and golf in his youth and still into his later years. He was a big thinker, an avid reader whose mind was always focused on new ideas, problem solving, and intellectually stimulating conversation sometimes over a few cocktails. An intense work ethic led to many self designed and completed “diy” projects. He and wife Genevieve were actively involved in the children’s lives including schooling and donations of both time and money. They provided a great foundation of love and support including many happy memories for all of their children that they will cherish forever. Later in life Andy had the pleasure of meeting Arlene Schwartz and the two held a special kinship. Arlene’s love and support for our family has been immeasurable and we are lucky to have her in our lives and thank her for all she has done. After suffering a heart attack immediately after Thanksgiving of 2018 even though wheel chair bound and against heavy odds he was able to make it through short term rehab and spend the remaining 18 months of his life in the comfort of his home surrounded by loved ones. There was lots of card playing, board games, conversation, a few car rides and gatherings to watch the Green Bay Packers Football wins. Don’t cry because it’s over, smile because it happened- Dr. Suess The family would like to sincerely thank the personal aides including Mona Lisa and specifically Marie Bien Aime who without their help, support, care, and effort many of those lasting memories at home would not have been possible. Gramps – YOU WILL BE MISSED TONS – but we will fill the void with memories and sunshine- CHEERS TO YOU GRAMPS! The immediate family will be performing a private ceremony we thank everyone for their thoughts and prayers. True to form Andy was a detailed planner, philosophical thinker always keeping things well kept and well thought out. He even left us a final message he found particularly poignant and meaningful with his own handwriting on it which we would like to share with all his loved ones. This picture is available in his page. With all of our love until we meet again -The Dax Family

Andrew Cyril Dax lovingly known as &#8220;Gramps&#8221; was born to eternal life on the morning of September 27, 2020. He was preceded in death by his loving wife Genevieve Olecki on March 18, 1997. Mother Mabel and Father Herman, brothers Earl,... View Obituary & Service Information

The family of Andrew Cyril Dax created this Life Tributes page to make it easy to share your memories.