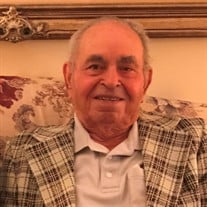 On Sunday, January 19, 2020, Amelio Albanesi, loving husband and father, passed away at the age of 89. Amelio was born in Gioiosa, Reggio Calabria, Italy on February 4, 1930 to Francesco Albanese and Nunziata Commisso Albanese. He was the youngest of the ten Albanese children. He came to the United States in 1950 and was soon introduced to Mary Oppedisano, whom he married on December 2, 1951. They raised one daughter, Nancy Albanesi Veress. Once in the United States, Amelio lived his first few years in Boston, Massachusetts where he worked with his older brother, Rocco, in his brother’s lawn maintenance and landscaping company. Amelio took over the landscaping business when Rocco made the decision to move to Florida in 1953. Amelio, Mary and their young daughter, Nancy, soon followed Rocco south after falling in love with the sunshine state on a visit. The two brothers once again ran a successful lawn maintenance and landscaping company, this time in Palm Beach, Florida until Rocco retired in 1968. He handed over the reins to Amelio who continued the business until 1995 when he also retired. One of Amelio’s proudest moments was when he gained his United States citizenship in November of 1956. He never regretted surrendering his Italian citizenship, and embraced the United States as his country and home. Amelio and Rocco were always close and enjoyed quail and dove hunting, spending every weekend in the woods during hunting season. Despite retirement, Amelio’s passion for growing things continued, and he could be found puttering around outside in the garden. He was known for his generosity, quick smile and sense of humor. He enjoyed regaling his friends and family with entertaining tales from his past and had a funny story for every occasion. Amelio was preceded in death by his father, Francesco and his mother, Nunziata. He is survived by his loving wife of 68 years, Mary, his daughter, Nancy, a brother, Salvatore, several nephews, nieces, and cousins, and a Godchild, Scott Richards.

On Sunday, January 19, 2020, Amelio Albanesi, loving husband and father, passed away at the age of 89. Amelio was born in Gioiosa, Reggio Calabria, Italy on February 4, 1930 to Francesco Albanese and Nunziata Commisso Albanese. He was the... View Obituary & Service Information

The family of Amelio Albanesi created this Life Tributes page to make it easy to share your memories.