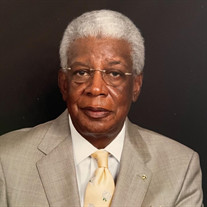 Alexander Boone was born Saturday, January 2, 1937 in McCrory, Arkansas to Edom Henry Boone and Savannah Grant Boone. He came with his mother to St. Louis, joining his father who had come a year earlier to find better work than sharecropping in the south. Alexander was also known as “Bobby” to his family and friends. It is said the name was given by one of his aunts who thought “Alexander” was too much to say. Alexander, the oldest of his four brothers and two sisters, moved with his family to 3702 Finney Avenue in May 1946. He attended St. Louis Public Schools, graduating from Sumner High School in 1955. After studying briefly at Harris Teachers College, he became one of the few and proud, enlisting in the United States Marines. He served with distinction as the only African-American in his platoon, and was honorably discharged on June 17, 1962. Returning to St. Louis, he worked at John Cochran VA hospital before becoming a member of the St. Louis Metropolitan Police Department. He rose rapidly, becoming the youngest homicide detective in the history of the department. During his time on the force, he solved many crimes and cracked many cases. One special highlight was on October 12, 1964, when he was selected to protect and escort Dr. Martin Luther King during King’s historic visit to speak at St. Louis University. In November of 1967 he resigned from the police department, moving to San Francisco, California to begin a career with Mutual of Omaha Insurance Company. His career led him to recognition in Ebony Magazine in 1969 and a promotion to district manager of insurance in Tustin, California. 1978 brought him to Oakland, where he was employed by the Association of Insurance Agents and elected president of the Oakland Chapter of the American Red Cross. He also served as a board member of the United Negro College Fund, and received numerous awards, plaques and letters of commendation and appreciation. During his time in the Bay Area, he met Dorothy Holloway at Jones United Methodist Church in San Francisco. This beautiful, stylish couple married in October of 1982; Bobby and Dorothy had the well-earned reputation of being the best-dressed couple wherever they went. As a couple, they worked tirelessly together for nearly 40 years to bring their combined experience and love of life everywhere they went. They were generous in helping others, and were often recognized for their volunteer work, as well as counseling and assisting young people in their educational efforts. One thing he would say is find something larger than yourself to belong to, and believe in it with all your heart. In September 2001 he retired from the California State Employees Association and they moved to West Palm Beach, Florida, where they joined Trinity United Methodist Church, serving faithfully there until his health failed. He departed this life on Wednesday, April 14, 2021 after a brief illness. His parents and two brothers, E.H. Boone, Jr. “Junie” and Marvin, preceded him in passing. Alexander leaves to cherish his memory and mourn his passing, his devoted and faithful wife, Dorothy Boone who lovingly and courageously stood by his side. He will also be lovingly remembered by two sisters, Sharon McLarren (Michael) and LaVerne Bland (Erick); two brothers, Allen Boone (Gail) and Leonard Boone (Dorothy), sister-in-law Pamela Boone, sister-in-law Olivia Parker, and many nieces, nephews and cousins. Among his special lifelong friends are Billy Bowden and Al Curtis Robinson. And special thanks to Peter Gates, Howard Fields, their church family at Trinity, next door neighbors Hilda and Mario Pollio, William and Vinette Holland, other relatives, loved ones and friends.

Alexander Boone was born Saturday, January 2, 1937 in McCrory, Arkansas to Edom Henry Boone and Savannah Grant Boone. He came with his mother to St. Louis, joining his father who had come a year earlier to find better work than sharecropping... View Obituary & Service Information

The family of Alexander Boone created this Life Tributes page to make it easy to share your memories.